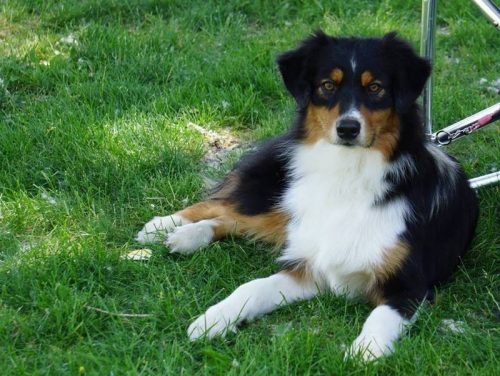 Madison was co-bred with my dear friend, Diane Land, and she has been causing heads to turn since the day she was born. Diane told me that we had two black tri girls and one blue girl in the SF Giants themed litter of nine puppies, but with one look at Madison I let Diane know we had to change that number.  Though she may look like a black tri at first glance, Madison is actually a blue merle!  Known in the breed as a “cryptic blue”, she has a small batch of blue on her shoulder, but that is all.  This pretty girl started out special for more than just her color.  It had been the plan all along for me to co-own my pick puppy with my sister, Sue Abbott Butts, and the excitement on the impending litter was damped when our father passed away just before the litter was due. As it turned out, Madison’s litter was born on the day of our father’s memorial service.  Sue and I took it as a sign that our dad, who love the dogs very much, was encouraging us to look forward to new and exciting things.  But we wanted to ensure that she was named in his honor somehow.  Her call name was easy with the Giants theme, Madison is named after our favorite pitcher, Madison Bummgarner and for her call name, we paid special tribute to our dad when we named her Marabil’s Forget Me Not.